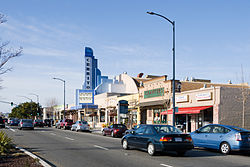 El Cerrito is a city in Contra Costa County, California, United States, and forms part of the San Francisco Bay Area. It has a population of 23,549 according to the 2010 census. El Cerrito was founded by refugees from the 1906 San Francisco earthquake. It was incorporated in 1917 as a village with 1,500 residents. As of the census in 2000, there were 23,171 people, 10,208 households and 5,971 families in the city. The top 20 employers in the city, according to the 2013 Comprehensive Annual Financial Report, include such entities as the West Contra Costa Unified School District, the City of El Cerrito, Lucky Stores, Pastime ACE Hardware, and Honda of El Cerrito.