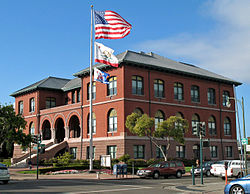 Alameda is a city in Alameda County, California, United States. It is located on Alameda Island and Bay Farm Island, and is adjacent to and south of Oakland and east of San Francisco across the San Francisco Bay. Bay Farm Island, a portion of which is also known as “Harbor Bay Isle”, is not actually an island, and is part of the mainland adjacent to the Oakland International Airport. The city’s estimated 2017 population was 79,928. Alameda is a charter city, rather than a general law city, allowing the city to provide for any form of government. Alameda became a charter city and adopted a council–manager government in 1916, which it retains to the present.